Around this time last year, my friend Rachel handed me a brightly colored postcard featuring a smiling, flying, caped cupcake and told me to enter this new cupcake competition based on one of my favorite Philly restaurants, PYT. Intrigued, I went home and emailed in, but was promptly told all spots were filled. (After all, it was just a week before the event.) Thankfully, the Cupcake Smash organizer, Melissa, kept my contact information and included me on the distribution list for this year’s event. It was about 15 seconds from the time the email from the “Cupcake Coordinator” arrived until the time I was registered. I was not missing out on this opportunity again. 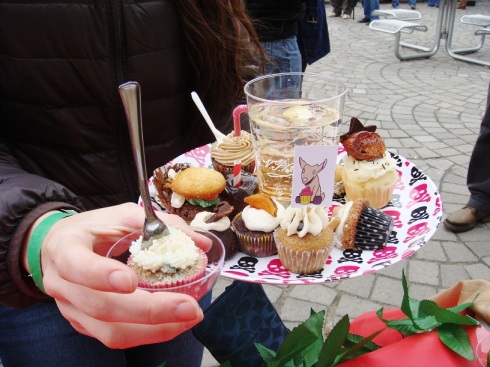 For those unfamiliar, Cupcake Smash is a baking challenge for both amateurs and professionals to showcase their cupcake creativity while raising money for Philabundance, the Philadelphia region’s largest hunger relief organization. Bakers are tasked with making a cupcake inspired by the PYT menu, known for its Krispy Kreme Burger, “adult milkshakes” and other adventures.

The hardest part of this experience was not baking 100+ perfect cupcakes in one night; it was settling on a cupcake with the perfect balance of creativity, novelty and taste. I don’t want to give away all my trials (because who knows what next year will bring), but there was liquid smoke, liquor and lots of bacon. I found a silver lining in every test cupcake (e.g. “these flavors are complex,” or “no one will think to do this!“), but I wasn’t completely wowed by any of them.

Two days before my contest entry details were due, I made a last ditch effort, turning to the latest wacky creation posted on PYT’s Facebook page — “Adult Cereal.” Simple as it may be, Adult Cereal is literally a bowl of Fruit Loops, milk and a shot of Three Olives Loopy Vodka. Breakfast of champions, amIright? What I ended up with was a Fruit Loop-flavored cupcake with a Loopy Vodka buttercream frosting — my very own recipe. Usually when I attempt something like that, things go awry and I get beyond flustered, but everything seemed to fall into place with this one.

I pitted my “Fruit Loopy” cupcake test batch against another anonymous test batch, and nearly all of the votes fell in favor of the former. I submitted the details and set out on my next challenge: decorating my station. I enlisted Rachel and my stepmother, Becky, as my event day helpers, and we bought up any sort of rainforest/tropical/luau decor we could find at the party store. (There may or may not have been an in-store Google search of “Where does Toucan Sam live?” performed.)

Our setup became a colorful, tropical breakfast-land — palm trees, flowers, giant bowl of Fruit Loops and a guest appearance by that lovable cereal mascot. We served the cupcakes in tiny cereal bowls with miniature spoons, which were really meant for aesthetic, but people seemed to enjoy trying to eat their cupcakes with them.

Overall, the response was great; the crowd loved the sweet taste of Fruit Loops topped with the complementary boozy frosting. Attendees were given tickets to vote for a favorite amateur cupcake and a favorite professional cupcake. I would have been thrilled with just one person saying my cupcake was their favorite, but as the event went on, I was so flattered by all the kind words and votes. The top five from each division moved on to the judges’ table, and when I made the cut, I was on cloud nine.

I had absolutely no expectations, so when they announced the amateur winner — a cupcake involving a chocolate-covered pretzel, which I sadly did not get to try — I wasn’t disappointed in the slightest. But then they announced the People’s Choice, and I heard a chuckle before an exclamation of, “That’s Forking Good!” Did I just hear that right? It didn’t really register until Rachel let out a loud “WHOOO” and shoved me up to get my gift certificate and awesomely tacky trophy.

Win or lose, the experience was fantastic. A big thanks to all my friends and family who made time to come out; I hope you drank all the PBR and Fuze you could handle on top of the 30 cupcakes you downed. I had such a good time frantically handing out cupcakes, checking out all the creative cupcake creations and helping to “beet” hunger as my awesome new Philabundance T-shirt reads. The event raised more than $7,600, which is twice as much as they raised last year. Can’t wait to see what Cupcake Smash III brings! 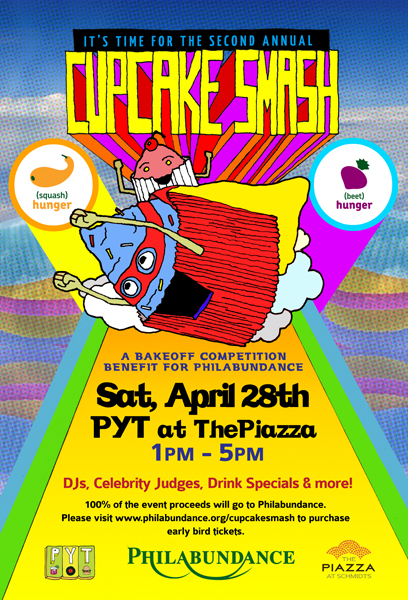