This year, most of my gift giving and Christmas revelry took place in advance of the actual holiday, leaving my Dec. 25 all to myself. I did not let this opportunity go to waste. I set my alarm for a rare “late” start (10 a.m.), donned some mismatched sweats, put on a little Ke$ha and got to work in the kitchen. What emerged was a a glorious breakfast of coconut vanilla waffles with vanilla protein “fluff” and homemade pomegranate syrup. 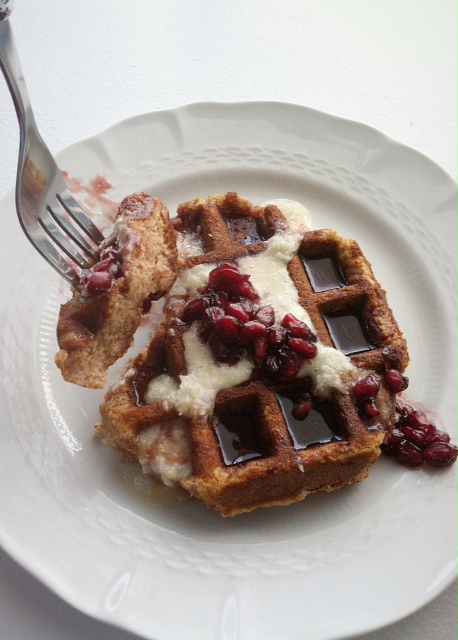 I have been obsessed with pomegranates for awhile now. Once I had my first taste of those  juicy little jewels, I couldn’t get enough. I already had my pomegranate deseeded, so that saved time because it’s a slight process. There are a few ways to get into that baby, but I use the water bowl method: cut pomegranate in half, submerge in water for 10 minutes, then pull apart the rind and allow it to float to the top of the water while the seeds (arils) sink; strain arils, then dry on paper towel.

The genesis of the protein “fluff” was initially for aesthetic purposes (I wanted to brighten it up a bit before adding the dark pom syrup), but I dug the creaminess it added, plus it’s always nice to sneak a little extra protein into a meal that may not otherwise be that rich in it.

This was a fabulous start to my day. I ran around cleaning and organizing the file cabinet I bought for myself (oh yeah, be jealous), then spent the next five hours marathoning the hell out of season two of “Girls.” Pretty much the best Christmas ever.

for protein fluff
♦1/2 scoop vanilla protein powder (I used Cellucor)
♦about 2 tsp. almond milk
(play around with these measurements until the consistency is correct; you want it somewhat liquescent, but not runny)

Heat coconut oil over medium heat. Add arils, juice and coconut sugar. Heat until sugar is dissolved and mixture has reduced by half. (This took a bit longer than I thought it would, so start it going before you start cooking waffle mix.)

Total time? 20 minutes (without deseeding of pomegranate)
Cost? $3.99 POM, $1.50 pomegranate, $6.99 almond meal, $8.99 coconut flour, $3.99 organic coconut, $4.98 organic coconut sugar, $5.99 coconut oil
Overall success relative to expectations? My first bite of the waffle on its own was underwhelming. I thought it was a little bland and moderately dense. (I may separate the egg first next time.) The good news is all the toppings help sweeten and moisten up the dish, and the combination is perfect — like a holiday in my mouth.