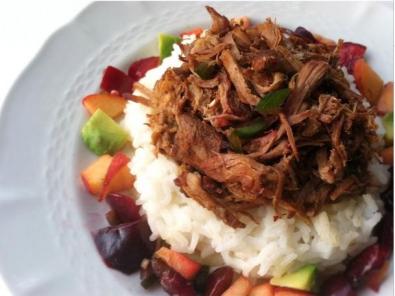 Over my handful of years in the kitchen, I have accumulated a lot of appliances — some the greatest ever created (KitchenAid mixer <3), and some that collect dust in the back of my cabinet (I’m looking at you, quesadilla maker). The appliance I always wanted but never had? The Crock Pot. That one time I entered a chili cook off, I had to borrow one from my friend Christina down the street. (Carrying the slow cooker home was a lot less embarrassing than the time I noisily wheeled her vacuum up and down the sidewalk.) I said a Crock Pot would be my housewarming gift to myself, but all those stupid things you have to buy when you move to a new place because my “gift,” and the Crock Pot lust fell by the wayside.

At a holiday party, I was sharing how I had never made a meal in a Crock Pot before (try that for your next game of “Never Have I Ever” – scandalous!), and two of my friends said they happened to have an extra one. A few months later, during Corri’s bridal shower, Dave brought along the Crock Pot, which happened to be brand-stinking-new. If only all bridal showers came with such nice party favors. As soon as I got home, I started a new Pinterest board for all the fabulous things I was going to make in my new slow cooker.

Killing two birds with one stone, I decided the CP’s first meal was going to be pulled pork, because I had never done that before, either. I didn’t care if it was healthy; I just wanted it to be good. And it was.

It may not be peach or cherry season when you’re reading this (and it isn’t while I’m writing this), but I’m sharing this now because it’s always pulled pork season. If these fruits aren’t fresh, leave off the salsa… and just start chopping up whatever you do have in your house. That always [reads: sometimes] works for me!

Adapted slightly from Iowa Girl Eats (from The Pioneer Woman)

For the salsa
♦1 c. chopped sweet cherries
♦1 c. chopped peaches (about 1 large peach)
♦1 jalapeno, minced
♦salt
♦juice of 1 lime
(I nixed the cilantro because I haaate it, but you can add some here if you don’t.)

Cut onion into quarters and separate into layers at the bottom of crock pot. Trim excess fat from the pork and cut into 4-6 large pieces, seasoned with salt and pepper. Lay pork on top of onions, then add peppers, adobo, barbecue sauce, brown sugar and root beer. Cover and cook on low for 6-8 hours or until pork is tender. Remove pork from the crock pot and shred into a bowl.

For the salsa, combine all ingredients in a bowl. This can be made in advance. We served over white rice, but you can easily make this into a taco or sandwich. I also added avocado to cool down the salsa a bit and add a creaminess to the dish.

Total time? 10 minutes prep (more if lots of trimming needed), 6-8 hours cook
Cost? $7 pork, $2 chipotle, $1 root beer, $2 barbecue sauce, $3 cherries, $1 peach
Overall success relative to expectations? 9 out of 10. I was just excited to pour root beer over a slab of meat. (I have soda maaaybe once a year, but whenever I do, it’s root beer.) All of the flavors came through so well, and no additional sauce was needed. The salsa was different than your traditional, from-a-jar variety. It was a *tad* spicy for me because of the jalapeno, which — like I said — can be cooled a bit with avocado, but I could have done with even less spice because the meat alone was just so damn good. For my first pulled pork and my first crock pot experience, this was definitely a winner. And I got to drink the extra root beer. Sweet nectar.