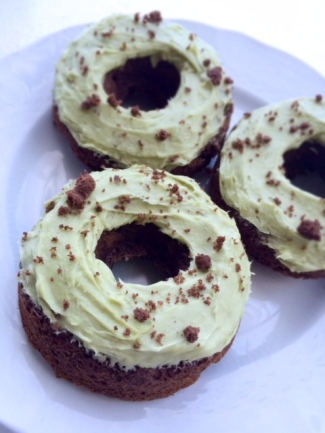 ​I recently got into a spirited debate (at the gym, of all places) about the proper spelling of everyone’s favorite circular, fried treat with a hole in the middle. I steadfastly stood in the “doughnut” corner versus two “donut” supporters. Listen, people: It’s doughnut. “Donut” is part of a brand name; it should follow “Dunkin” or any other company/product that has legally filed its name to include the misspelling, but that’s it. Are you one of those people who calls tissues Kleenex? Stop giving these companies free marketing! (And if you’re spelling it that way because you’re too lazy to type it the correct way… just… go. Please.)

The great doughnut debate of 2014 reminded me that I had not made doughnuts in a really long time, so I took to Pinterest to find myself a healthy[ish] alternative to Dunkin’ Donuts (note the proper spelling in this instance), and found these paleo mint chocolate doughnuts from the Healthy Maven. (Sorry if you’re sick of paleo. I’ll make the next post something bad for you.)

The doughnuts were pretty minty, and the frosting was pretty pretty with the green tint come from a bit of matcha mixed into the coconut cream. I opted to top mine with crumbles of Mrs. Thinsters brownie thins for a little added pizzazz. (If you really want to unhealthify [speaking of poor grammar] this treat, Thin Mints would also be a delicious topping.)

For doughnuts
♦1 c. almond meal
♦2 tbs. coconut flour
♦1/4 c. unsweetened cocoa powder
♦1/4 tsp. baking soda
♦1/2 tsp. baking powder
♦1/4 tsp. sea salt
♦1/2 c. unsweetened applesauce (*I did not have applesauce in my house, so I made my own from one apple — peeled, chopped into bits, tbs. of lemon juice and boiled til it was soft enough to pulverize with my immersion blender. Yes, everything must be a project.)
♦2 eggs
♦3 tbs. honey
♦1/2 tsp. vanilla extract
♦1/2 tsp. peppermint extract​
♦Toppings if desired

Grease a doughnut pan with coconut oil, and divide batter evenly. (You could also roll into balls if you don’t have a pan.) Bake at 350 degrees for 15 minutes. Allow doughnuts to cool 15-20 minutes before removing from pan. Carefully transfer to wire rack to cool completely.

For frosting
♦1 can full-fat coconut milk (left in fridge for at least 1 hour), do NOT shake
♦1/2 tsp matcha powder (mostly for color — not taste; you may also use spirulina powder)
♦1 tbs. honey

While doughnuts are cooling, open coconut milk. (Do not shake the can before opening.) Scrape the cream from the top and place in mixing bowl. Beat on high for several minutes until the cream stiffens and can hold peaks. Add in matcha or spirulina powder and honey, then beat for one more minute. It does not look like a lot, but it will go a long way. Carefully spread frosting on doughnuts.

Total time? 10 minutes prep, 15 bake, 10 minutes decorate
Cost? $6.99 almond meal, $8.99 coconut flour, $6.99 matcha powder, $1.99 canned coconut milk, ? applesauce (or the cost of the time I won’t get back from having to whip up homemade applesauce to make doughnuts… Not bitter.)
Overall success relative to expectations? 10 out 10. These were good — like, way better than I expected. I immediately fell in love with the frosting. It was only coconut cream with a little bit of matcha, but I could have eaten it with a spoon if I hadn’t globbed all of it onto the doughnuts. (A little goes a long way, but not enough to have a frosting snack.) The doughnuts stayed fresh for at least four days (I had to fend off a few suitors to make them last that long), and the flavor was good. Obviously, they’re not going to taste like fried balls of doughy goodness, but they’re definitely a viable alternative, especially if consumption of any traditional doughnut leaves you with guilt pangs for hours… days… weeks… Do not mock; this is why I stopped going to Dunkin’ Donuts. Well, that, and the misspelling.