I’ve just returned from a week-long business trip to Nashville, and I feel like I should be adding “ya’ll” to the end of every sentence.  I experienced a good deal of southern hospitality, but downtown Nashville is a crazy place and country music isn’t my thing, so I’m not so sure it’ll be my destination of choice any time soon.

I did get the chance to have a little bit of southern cuisine, and I thoroughly enjoyed my smoked cheddar grits, fried pickles, ya-ya gumbo (smoked chicken, crawfish, dark roux) and sweet potato puffs with caramel sauce.

Not since I was dealing with first-day-of-school jitters has the end of August/beginning of September been particularly eventful. For the last four years or so, I’d just been chugging away at whatever articles or projects were on the table, and the only reason I’d even bat an eyelash is because the volume of school buses would make my hour-long morning commute even longer.

This year’s a little different. See, 2009 was one of the best years of my life, and 2010? Quite the opposite. But during late August/early September, I found a little bit of salvation, and it wasn’t until the one-year anniversary of these little milestones that I realized just how important this time of year has been. END_OF_DOCUMENT_TOKEN_TO_BE_REPLACED

You know what they say about small packages, and when it comes to dessert, I belong to the ‘best things come in small packages’ school of thought. I don’t want a giant slab of seven-layer cake or a “Man V. Food” kitchen sink full of ice cream sundae. Impressive as they may be, they’re not stimulating my salivatory glands quite like a bite-sized bit of awesome. END_OF_DOCUMENT_TOKEN_TO_BE_REPLACED

This weekend was full of victories big and small. My Saturday softball team notched its first win of the season. I was at PPL Park to see the Union beat the Red Bulls. My fantasy team, the Rockford Peaches, started off the season 1-0 in dramatic fashion. Of all the successes that came this weekend, though, none was more exciting than competing in the local Ultimate Cupcake Challenge.

I entered the contest not knowing what the prizes were, and frankly, not caring; I just wanted to see what I could do, get my food out there and anything that came after that was an added bonus. After I registered, I spent two days brainstorming which cupcakes to make (three different entries, one dozen each), and the aesthetics of each option. I wanted two “surefire” submissions — i.e. something I’d made before — so I opted for Fluffer-Oreo and Vanilla Chai. It was also important to me to give them a strong variety, so I felt the third cupcake needed to be fruity: strawberry lemonade.

I had never made this cupcake before, and getting it right was a challenge (and remains a challenge, because I still think it can be better). With all the ambition in the world, I did a trial run Thursday afternoon, and to put it nicely, it was a four-hour disaster. I partially filled the cake with a lemonade concentrate, and while the flavor was pretty good, the sticky, soggy texture was very off-putting. The strawberry frosting was too fluid, so it practically slid right off the cake. Wind from sails? Gone. My little cake seemed absolutely hopeless.

After a pep talk, some sleep and a homemade iced chai breakfast, I was ready to give it another try. I tweaked some things, experimented a bit and arrived at a strawberry-lemonade cupcake I could proudly submit (one I’ll write about in more detail in my next post). The frosting was incredibly sweet and tart, but that’s what makes a good lemonade after all, right?

The next day, I arrived at judging early to check out the competition. There were all sorts of cupcakes — some creative flavors, some beautifully decorated with fondant. Three independent judges strolled around the table, stopping at each plate to sample a bite of each treat. I was thrilled to watch one of the judges take a bite of my Fluffer Oreo cake, exclaim how much she loved it and say, “I’m putting this aside for later.” As the scores were being tallied, she went back and ate the whole thing — the only cupcake to get eaten in full!

It seemed the scores were tied, so they called the judges back in to make the final decision between my strawberry-lemonade cupcake and another entrant’s black forest-coconut cake (decorated as a spring chick, at left), and unfortunately, she edged me out. I’ll take pride in coming in second place, though, considering this woman has her own bake shop and I’ve been cooking and baking for less than a year. It’s also a little victory to see my cupcakes sell better than any other cupcake at the challenge!

Even though my competitive nature typically makes “second place” hard to swallow, I’m proud of what I accomplished in my first-ever culinary competition, especially because the judges favored my very own (and almost-scrapped) creation over my “safer” choices. Special thanks to my friends and family for coming out and supporting me! 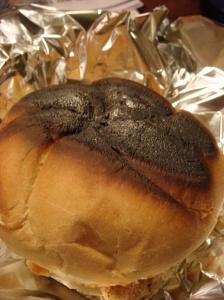